The goal of the Speed Safety Camera program is to reduce speeding and save lives. Marine Drive is one of 30 streets that comprise Portland’s High Crash Network. The roads in this network make up just 8 percent of Portland streets, but account for 57 percent of fatal crashes citywide.

When people exceed the posted speed limit while driving past the safety cameras, the camera systems capture photos and video for review by Portland Police. An officer from the Portland Police Bureau will review violations before a citation is issued. Penalties are the same as a speeding violation initiated by any other means. The typical speeding citation in Oregon is a Class C violation (11 to 20 mph in excess of the speed limit) resulting in a $170 fine. HB 2621 requires that money received from the speeding tickets can only be spent to cover the cost of the program or pay for safety improvements and programs on High Crash Corridors.

The Speed Safety Cameras program provides ample warning to people driving in the area. State law requires speed signage and speed reader boards to be installed on the street warning drivers at least 100 yards in advance of the cameras in both directions. Speed reader board displays a driver’s current rate of speed providing immediate feedback in advance of the fixed speed safety camera. PBOT staff also conducted extensive outreach with community stakeholders to raise awareness of the changes along the two corridors, before the cameras were installed.

In addition to the new cameras, PBOT is delivering additional safety and maintenance projects on Marine Drive. For example, PBOT will install a traffic signal at NE Marine Drive and 122nd Avenue, and installation of rumble strips is planned as well. 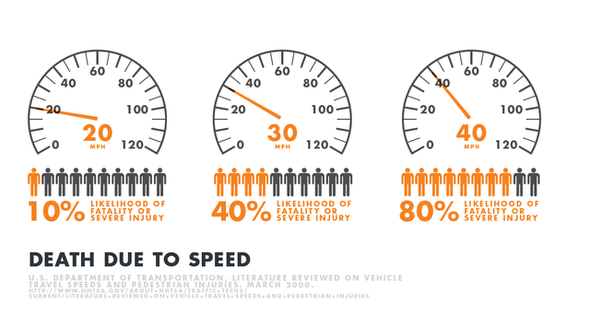 The City of Portland has joined cities around the country in embracing Vision Zero – the notion that the death of even one person on our roads is one too many. Vision Zero prevents traffic deaths through smart policy and system design. Learn more about Vision Zero and Speed Safety Cameras by visiting http://www.visionzeroportland.com.

The City of Portland complies with all non‐discrimination, Civil Rights laws including Civil Rights Title VI and ADA Title II. To help ensure equal access to City programs, services and activities, the City of Portland will reasonably modify policies/procedures and provide auxiliary aids/services to persons with disabilities. Call 503-823-5185, TTY 503-823-6868 or Oregon Relay Service: 711 with such requests, or visit http://bit.ly/13EWaCg